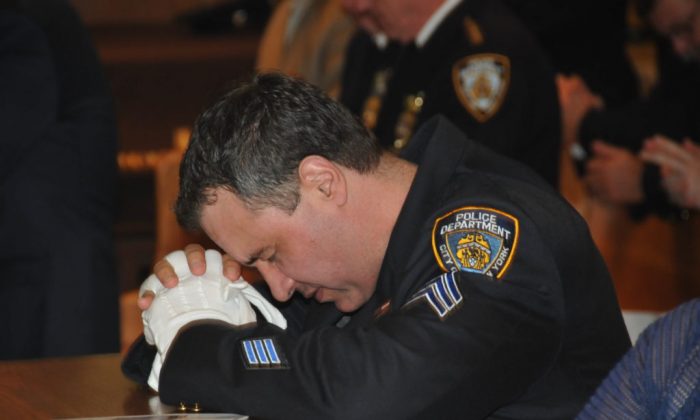 As of June 30, 2021, according to preliminary data from the Department of Justice, 155 federal, state, tribal and local law enforcement officers had died in the line of duty this year.

The Department of Justice (DOJ) notes an increase of approximately 10 percent from the 141 officers killed during the same period last year. The 155 line-of-duty deaths are on a pace to exceed the 295 law enforcement fatalities recorded in 2020, the second-highest total on record.

At this rate, officer line-of-duty deaths could near the 1930 toll of 312 fatalities, the most ever recorded in a single year.

The DOJ also notes that the first six months of this year have demonstrated that America’s law enforcement officers are still battling the deadly effects of the COVID-19 pandemic, with some 71 officers dying as a result of contracting the disease while executing official duties.

The 71 officers represent a decrease of 7 percent compared to the 76 officers who died of COVID-19 related causes during the first half of last year.

However, this would still make COVID-19 related fatalities the single highest cause of law enforcement deaths occurring in the first six months of 2021.

Fast forward from the sobering statistics from the DOJ just one month to July 31, 2021. On this date, another heart-wrenching report was published by the National Fraternal Order of Police (NFOP). According to this report, there have been 185 officers shot so far in 2021, 35 of whom were killed by gunfire. There have been 52 ambush-style attacks on law enforcement officers in 2021, up 126 percent from 2020 YTD. This has resulted in 67 officers shot, 17 of whom were killed.

In one of my articles on America’s fallen law enforcement heroes, I memorialize that “when a police officer is killed there is an eternal wound to the family, colleagues, community and the heart of America.”

This wound has deepened this year with the continuous tragic headlines of officers killed while protecting and serving our communities.

One of the too many tragedies wounding America’s heart is the story of Chicago police officer Ella G. French.

Officer French, a 29-year-old female, was shot and killed on Aug. 7, 2021. Another officer was seriously wounded in an exchange of gunfire during a traffic stop.

Officer French’s death was the first fatality of a Chicago police officer since 2018, and the first female officer killed in Chicago in the line of duty in 33 years.

In a Twitter post, the Chicago Police Department stated, “We will never forget the true bravery she exemplified as she laid down her life to protect others. Please hold her family, loved ones and fellow Chicago Police Officers in your thoughts as we grieve the loss of this hero.”

Additional condolences were expressed from law enforcement throughout America.  The sentiments include the following postings on Twitter:

“Officer Ella French of the Chicago Police Department was shot and killed last night while working on duty. Please continue to pray for the family of Officer French and the fast recovery of her partner who was also shot. This violence towards LE must end!”

“.@Chicago_Police PO Ella French & her partner were both shot last night during a vehicle stop. Officer French succumbed to her injuries & her partner is hospitalized fighting for his life. The hearts of the entire NYPD family go out to our friends at Chicago PD.”

“We stand with our brothers and sisters of the Chicago Police Department as they mourn the murder of Officer Ella French and pray for the recovery of her partner. Both were ambushed during a traffic stop. Officer French was 29 years old and the mother of a 2 month old child.”

“Thoughts and prayers are with our brothers and sisters of the @Chicago_Police Department. Two Officers were shot in the line of duty last night. One has died, and the other is fighting for his life. Thanks to all who continue to serve. Rest in Peace Officer Ella French.”

“The men and women of the #BPD extend our sincere condolences and sympathies to the family, friends, and coworkers of @Chicago_Police. Officer Ella French who was killed in the line of duty yesterday while protecting the citizens of Chicago.”

“Chicago PD Officer Ella French, a mother and public servant, was murdered last night while protecting her community. Her partner was also shot and remains in critical condition. @LBPD offers condolences to the Chicago Police Department and we pray for her partner’s recovery.”

“The entire @NYPD mourns the loss of Police Officer Ella French, who gave her life protecting the people of Chicago.  Last night, Ella was shot and killed while conducting a car stop. Another officer was also shot and critically wounded in the same incident. May Ella Rest In Peace.”

Officer Ella French and every hero who died protecting and serving our communities deserve America’s eternal gratitude, remembrance and honor. We must also be forever mindful of their families and support them with unwavering compassion, sensitivity and dignity. America is the land of the free and home of the brave because of these faithful servants.

We will eternally honor them and forever hold their families, friends and law enforcement colleagues in our prayers.

Vincent J. Bove, CPP, founder of Reawakening America LLC, is a national speaker and author with over 300 published works. Bove is recipient of the FBI Director’s Community Leadership Award and former confidant of the New York Yankees. He is a partner with Global Security Resolutions LLC and served as spokesperson for a coalition of Virginia Tech tragedy victim’s families. His most recent books are “Reawakening America” and “Listen To Their Cries.” Related: www.vincentbove.com and Twitter @vincentjbove.